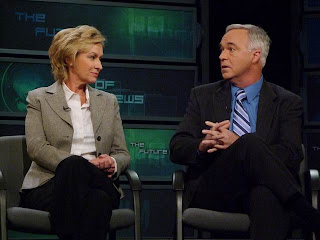 Like Washington's recent weather, the skies produce a constant drizzle over the print media industry -- is it dead, is it dying, is it still alive? Those were the questions drawing a standing-room only crowd to the packed Knight TV studio at the Newseum Saturday, where news junkies craned their necks to see magazine visionary Tina Brown, who, having turned around The New Yorker and Vanity Fair, can speak more credibly about print journalism than almost anyone.

The prognosis? "It's been a brutal 12 months in the magazine business," she admitted. "I believe self-help and service magazines will be exclusively online" in the near future. Weekly news magazines? Mostly gone in five years.

CNN's Frank Sesno, also a professor of public policy and communication at The George Washington University School of Media and Public Affairs, offered the latest newsprint obituary. "105 newspapers have closed as of June this year," he said. "What do you make of that?"

Some blame the flight of readers to the web. "But it's not just the internet hurting newspapers," Brown said, "It's corporate greed. Hollowing out content, cutting and cutting until there's nothing left" has eviscerated the reporting and writing that made print media big.

About a year ago, Brown came up with her own solution. Her sparkling site TheDailyBeast.com -- full of good writing, in-depth reporting and serious analysis -- drew nearly 4 million unique visitors in September, with 35 million page views. "It's very impressive" for a startup, said Paulson. More important, he said: The Daily Beast "has credibility."

Get there fast. Brown is now moving into online books and other ventures. "Books are the new magazines," she announced, because readers want an incisive, quick take on the news or to read a book on the plane. 50,000 words on a Kindle, she says.

The inimitable Brown and Paulson are the latest headliners in "The Future of News," a Ford Foundation-backed 10-part Newseum public TV series hosted by Sesno exploring news and communication in the digital age. Next up: Investigative Journalism: How Will it Survive? with Bob Woodward and Bull Buzenberg Oct. 24.

The series leaves room for nostalgia. "Remember Deadline U.S.A.?" Sesno asked, "One of my favorite movies" in which Humphrey Bogart playes a crusading editor who tries to save his newspaper from being sold to commercial interests.

"HR would come in and say, you can't drink, smoke or swear," and he'd be gone, Paulson retorted.

But real journalism continues to burn brightly as a worthy pursuit, even today. "It's still the best profession," Paulson said sincerely. "The Future of News," produced by the Newseum's Susan Brooks-Kelly with the help of Paul Sparrow, Vice President of Broadcasting, is drawing big crowds to the tapings.

Make no mistake, the dream is still alive. The show's on-air reporter Sonya Gavankar aspires to be a cross between CNN's Christiane Amanpour and NPR's Terry Gross. "I wanted to be a war correspondent," she said. Covering the future of journalism, she's close.

Submitted to HOP by "The Mole" a.k.a Beth Solomon
Pictured above: Tina Brown and Ken Paulson
Photo credit: Bruce Guthrie

Visit www.newseum.org for more information.
Posted by Unknown at 3:12 PM