Meridian House President emeritus Walter Cutler and his photographer/artist wife Didi pulled a Ginger Rogers/Fred Astair number on the dance floor at the 43rd Annual Meridian Ball.  Hands down, they were the smoothest matched-set.

It was glamour galore at the Ball - good-looking women, a handsome setting and prominent faces among the 750 guests that began the Black Tie affair with dinners hosted by 22 ambassadors at their embassies and residences or at the private dinner held in the White-Meyer House. 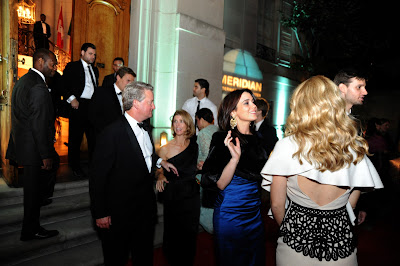 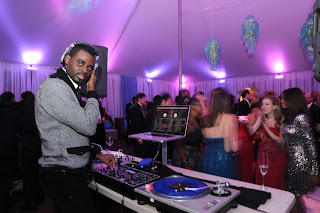 White-Meyer and Meridian House, adjoining mansions designed by famed DC architect John Russell Pope, form the Meridian International Center.  Throughout the party guests streamed back and forth through the connecting garden, stopping at the ample dessert buffet provided by the Embassy of Finland and alternating between the two dance bands.   Under the garden's huge white tent, the dancing was fast-paced and energetic; inside, the tempo smooth.

Guests were greeted by Stuart W. Holliday, President and CEO of Meridian House Center.  Among others in the receiving line were Ball Chairman Mary Ourisman, Congressional Co-chairs Jill Cooper Udall and Linda McCaul and Susanna Quinn, chairman of the White Meyer dinner.  Honorary Chair for the ball was First Lady Michelle Obama.

The evening benefited the Center, whose mission is to strengthen international understanding by engaging public and private sectors and the diplomatic community in an exchange of people, ideas and culture.

In saying that this year alone Meridian will undertake 200 projects and delegations to carry out this aim, President Stuart Holliday concluded by saying of Meridian’s core values: “Meridian is Global Leadership. Never has there been a time where that is more important.