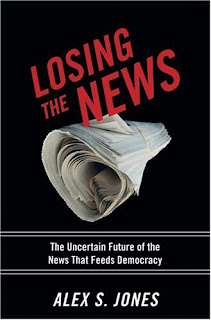 Media heavyweights Jim Lehrer, Mark Shields and Judy Woodruff of the NewsHour, Andy Glass of Politico, Bloomberg’s Al Hunt, BBC’s Rome Hartman and GWU’s Frank Sesno jammed the spacious Cleveland Park home to celebrate their former colleague, who covered the media for the New York Times and won a Pulitzer before going to Harvard’s Shorenstein Center on the Press, Politics and Public Policy.

“Losing the News” rightly worries about the erosion of what Jones calls the “iron core” of journalism – the “values and reporting” that serve the public.  Jones was literally surrounded by people who built that iron core as he spoke to the gathering of 150.

Jones says the prognosis is mixed. “My optimism comes from believing that we’re going to be able to solve” the problem of splintering audiences and declining circulation. “It’s too important not to solve. But it could go the other way."

Jones vehemently disagrees with the view that the print newspaper industry has contributed to its own demise by not moving faster to adopt new technologies and distribution methods.

Media giant Gannett, on the other hand, has moved aggressively to attract online audiences by luring them through non-traditional information sites like highschoolsports.net and MomsLikeMe.com. Gannett’s online advertising revenue soared 80 percent in its latest reporting, while print advertising – still the bread and butter for the behemoth – declined almost 25%.

That doesn’t cut the mustard for Jones. “If these organizations save themselves by getting out of the news business, I don’t care what happens to them. I fear that they’re gong to become like local television, programming calculated to attract an audience.”

But the author isn’t all doom and gloom, and he’s written a book with broad appeal. “The title of the book is losing the news, not lost the news,” he says. “It’s the public mission we have to save.”