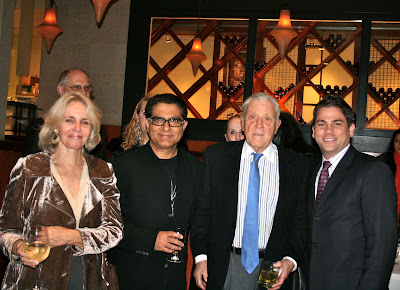 Out of Time?  Thought so.

Before the arrival of an exquisite hazelnut tort prepared by chef Enzo Fargione of Teatro Goldoni, author and motivational speaker Deepak Chopra already had guests mesmerized at an intimate dinner in his honor hosted by Christine Warnke of soon-to-merge law firm Hogan & Hartson and publicist Janet Donovan.

The master of understanding the mind, body and spirit emphasized a belief widely held in the East -- time is an invention of the mind. "People who are running out of time frequently drop dead of a heart attack," he said.  Oh my, could have been a disastrous dinner party considering many of the guests were columnists trying to make their deadlines.  "But," he added,  "if your relationship with time comes from your soul, you tune into time and have synchronicity with it. It's an attitude that changes the experience -- and the literal condition -- of life."  Sage advice for the lobbyists in the house as well.

In town to promote his new book, Reinventing the Body, Resurrecting the Soul, offers "10 breakthroughs – five for the body, five for the soul – that lead to self-transformation," according to Random House.

"Washington feels like an environment in which everyone is playing a game," said Dr. Chopra. "There are mafias everywhere."

His wife Rita said she totally avoided the city during the Bush years and calls herself an Obama "super supporter".  "I feel for Obama, what he's going through."  She has avoided the nation's capital since the Clinton years.

It was an obvious choice to bring up health care currently being hashed out in Congress.  "What we're talking about now is not health care reform, but insurance reform," he said. He bases his latest advice from studies on Buddhist monks, among others. "MRIs showed a positive response in the brain" -- healing ability -- when the brain focused on loving-kindness and joy. These are things Buddhists practice daily. Lo and behold, the studies showed that the brain could create other good by-products during these thought patterns."

"Information gets metabolized, like that clenching feeling when the stock market plummets. On the other hand, we can use our bodies to transcend time. How? Ecstasy, passion, love, he says. Practice it, daily."  Bring it on.

Even, just for a measured split second, there was tranquility on K Street.  We'll have what he's having.