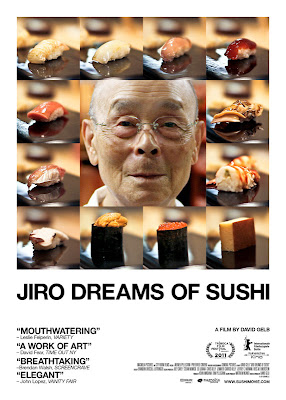 As a sushi lover, the title of this film, Jiro Dreams of Sushi, ensured that the chances of me liking this movie were pretty strong.

Jiro Dreams of Sushi is a beautiful chronicle of Japan’s national treasure and most beloved sushi chef, directed by American filmmaker David Gelb.
Jiro Ono is 85 years old and runs Japan’s most coveted sushi restaurant out of a subway station in Tokyo. Reservations must be made at least a month in advance and the price of a reservation is 30,000 yen. I don’t know what that translates to in American dollars but with only 10 seats at the sushi bar I bet it’s a lot.

Alongside Jiro are his 50 year old son Yoshikazu Ono and a team of devoted apprentices who spend 10 years apprenticing with Jiro.  In accordance with Japanese culture and tradition, Yoshikazu is the son expected to carry on Jiro’s legacy, but we also have a chance to meet Jiro’s younger son who runs another larger Jiro-owned sushi restaurant, this one not in a subway station, and seemingly without some of the pressures for greatness are contained within the confines of the smaller, more elite establishment.

The question the film poses is what will happen once Jiro passes away?  Will Yoshikazu be able to rise to his father’s greatness? Amidst beautiful shots of some of the most gorgeous sushi you’ve ever seen, a trip to the historic and wonderfully quirky Tokyo fish market, and a journey to Jiro’s hometown, David Gelb guides us through this wonderful world where pride in your work and striving to be the best are some of the most wonderful characteristics. 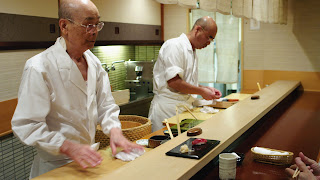 In my interview with David Gelb (who was also the cinematographer), he sheds light on some questions I had about Jiro Ono.
CC:  Do you think your film will help change perceptions about Jiro's eldest son and show he's a success in his own right?
DG: I think the film is a testament to how great a teacher Jiro is.  He's raised and trained two phenomenal sushi chefs and they deserve recognition for their own achievements as well.
CC: The film is so beautiful. I know you are also the cinematographer. What was it like to shoot sushi and rice?
DG: Shooting the sushi was one of my favorite parts.  When you really love something its easy to make it beautiful, so I did my best to portray the food from the POV of a ravenously hungry sushi lover.  Luckily I had the opportunity to eat much of the sushi shown on screen.
CC: What was your favorite part of shooting the film?
DG: Other than shooting the sushi and eating it, I loved filming the tuna auction at the Tsukiji market.  It's a fascinating event whose order is largely unchanged over the last century but appears to teeter on the edge of chaos.  It was a thrill to shoot in the hustle and bustle.
CC: What surprised you most while making the movie?
DG: I was surprised at the emphasis on the rice at sushi making.  I knew it was important, but Jiro says it is of equal importance to the fish.  The essence of sushi is the balance between the fish and the rice and Jiro's is the most delicious rice I've ever had.
CC: What is Jiro's home life like? Is he a widower?
DG: We agreed to keep Jiro's home life private and focus on his work.  Jiro's wife is still alive and even though she unfortunately doesn't appear in the film she is a big part of his life.  In Japanese society, the husband is the master of the work and the wife is the master of the home.  Jiro's wife almost never comes to the restaurant, but at home she is the boss.