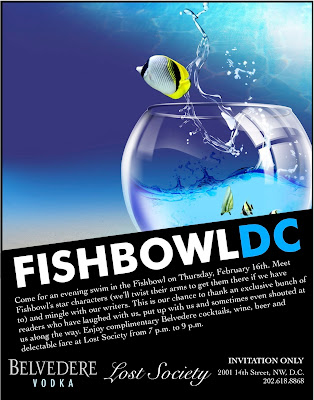 Getting lost?  Not so bad after all.  The conga line leading to the real Lost Society warped into a meet and greet.  The big, burly intern?  Well, let's just say that some of us didn't get to swim in the fishbowl on Thursday night.

The turn-away reasons were varied, from no I.D.'s to fake I.D's., but when the guy was as described - big and burly - you don't mess with big and burly, intern or not.  Some of us moved on, others persisted.  Washingtonian's Carol Joynt was among the persistent, we caved after being parked when we could of had a Belvedere by then.


The occasion?  FBDC's first ever event. "Hosting a first party can be a harrowing experience," Rothstein told us.  "But I loved meeting the characters of the Fishbowl face to face, watching them squirm with one another, but most of all relaxing and not worry about getting quoted for a change."

So, of what we were deprived by the the big and burly bouncer at the "night of journalistic debauchery?"  High on the list were the Belvedere cocktails, while passing on the Fish & Chips.

We hear we missed that newly anointed contributor Eddie Scarry was being - well scary - "when liquid courage became apparent by 9pm when we caught him hitting on a houseplant in the corner. We hear he took the potted plant to his place around 10p." (Matt Dornic)  The police are on it.

We hear we missed the funniest comment of the night that went to USA Today's Jackie Kucinich who spotted a gentleman wearing low-rise jeans that left little to the imagination. After gently tapping him on the shoulder, Kucinich said "Hey doll, you're giving it away for free." (courtesy of our favorite tipster)

We hear we missed some makeups and some breakups, as competing reporters cleared the air or gave rise to a new disputes.  But most of all - WE MISSED TUCKA!

"I'd walk barefoot to Baltimore to attend a Betsy party," he told us. "This one did not disappoint. And I got to drive there."